Take Courage and Fly On (Part 2)

This is about finding the courage

to get back up in the sky. 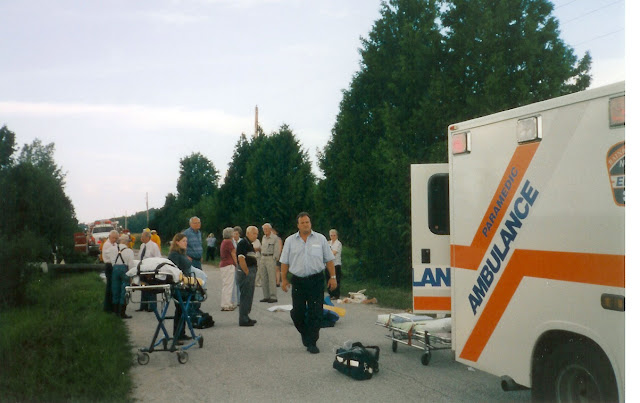 
who has flown all her life

and yet feared all her life that

If you are someone like me who just plain

struggles with the idea

who figures a plane in trouble will either

dive straight down the way paper airplanes do,

dismantle in midair the way cartoon airplanes do, 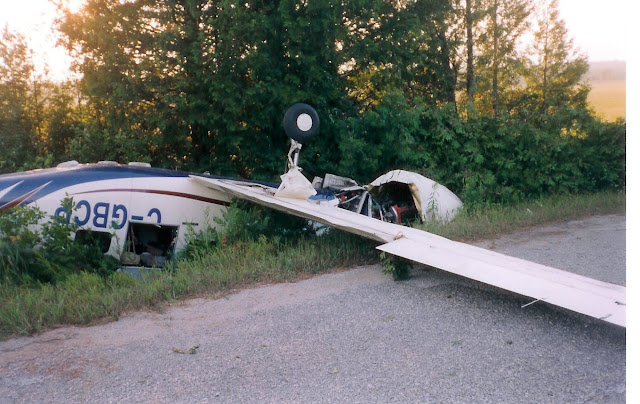 If THIS is your starting place,

do you find the courage to get back up? 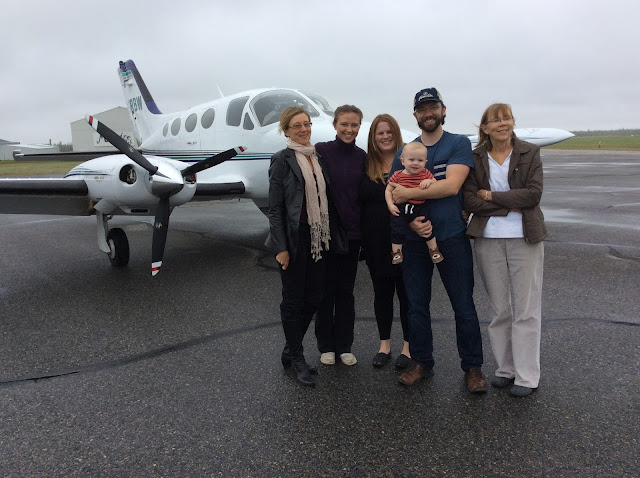 Me on the left, on my most recent plane trip

and an overactive imagination...


It builds breath by breath;

Courage is a capacity,

and it builds up

the more you prove it right;

the more they are proven wrong.


It is in the testing

that this great courage


Then, you realize you are not who you were

when you lay bleeding in the ditch.

You are not the same

not just in planes,

a way of life.

I am now going to dredge up for you

the full story of the crash

because I want to bring you along

I have some black boxes


My hope is that

when I open the final black box,

you will be illumined --


that you will receive,

should you need or want it,

your own impartation of Courage 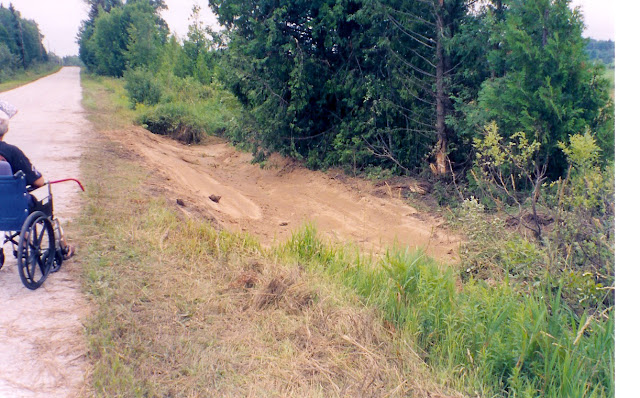 it is the cold, hard witness. 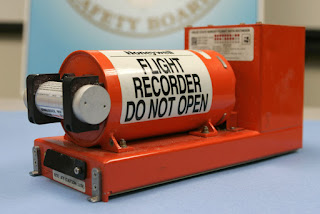 It is the objective memory of the aircraft.

It is the key to how

it all went down,

especially when the pilot doesn't survive. 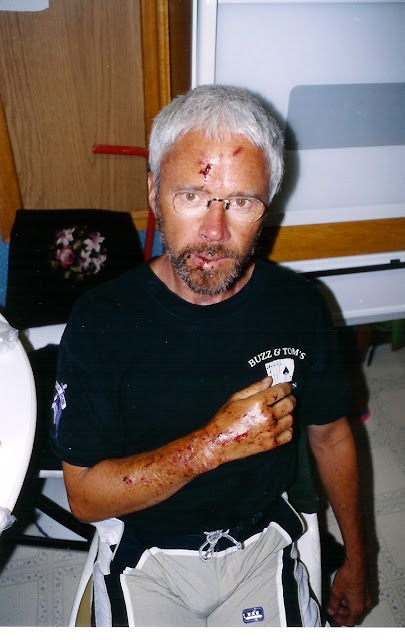 But this pilot did survive.

So it is my Dad who holds the honor

of reciting the flight history of the Piper Malibu.


Here is his account of our catastrophic engine failure

(written in the 3rd person) 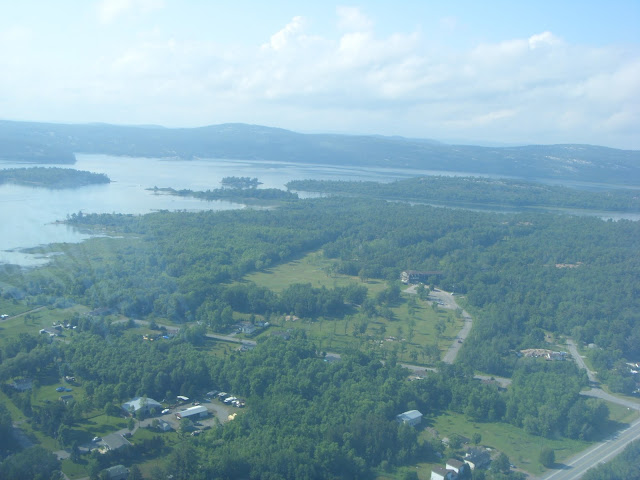 "The climb-out was normal routine up above the clouds until Toronto Air Traffic Control called with a revised clearance to temporarily level off at 12,000 feet to allow another aircraft to pass overhead.

Ben reduced the power levers to cruise power settings and instantly there was no power at all.
Checks of magnetos, fuel tank selector, mixture control, fuel pump switch, etc. revealed that no power could be restored.

Perry told Ben to pull the nose up, reducing to the gliding speed of 90 knots (175 kph) and to reverse course back towards Gore Bay - using compass heading since the cloud layer below blocked any view of the water or land below.

Then he made a "Mayday" call to Toronto, which was met with stunned silence on the radio.

Everyone in the control room heard the Mayday and many mouths dropped open - the controller could see by the radar screen that the stricken airplane was over a large expanse of water in the North Channel, equally far from 3 paved airports. 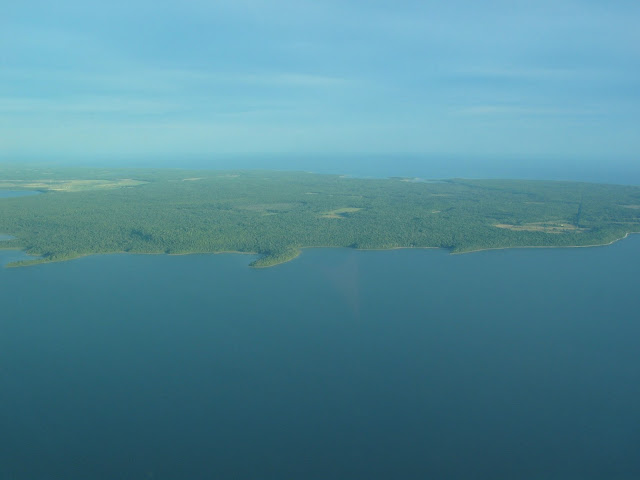 He had no advice to offer Perry and Ben, but then found his voice, asked for the pilots' intentions and offered to call any emergency services they wanted.

Perry replied that they were gliding towards land and wouldn't know until below the clouds, where fire and ambulance vehicles should be sent to.

As the airplane continued gliding lower, Perry was busy with calculations of descent rate, groundspeed, distance and time to Gore Bay's airport.

When there was some tailwind, it looked like they could make it there for a no-power landing; each time the wind changed, another calculation was needed and the chance of reaching Gore Bay switched between making it and not making it.

When Trish and Ginette heard Perry tell Ben "We're not going to make it", their prayers became more fervent.

Ben glided the plane safely down through the clouds - not so easy with zero engine power (and therefore no air suction provided to the "artificial horizon" instrument that is normally relied upon when flying in cloud) - and instantly Perry saw that the Gore Bay Airport was still too far away to glide to.

They were gliding silently over solid bush south of Sheshegwaning.

Upon reaching the west shore of Bayfield Sound, a life or death decision was required.

Perry considered leaving the wheels up and skimming onto the water.  Drowning and hypothermia would be real concerns, along with getting out of the airplane quickly before it would sink.

Next choice was to glide straight ahead to Barrie Island, but there might not be adequate altitude to allow that far of a glide, resulting in a water landing again.  A brief look at the steep, narrow, rocky shoreline below ruled that out as a landing site.

Looking south, Perry spotted Cook's Dock Road - a slice through the bush that looked narrow, but more inviting than the solid trees everywhere else.  He took the controls from Ben and steered south.

The plane reached the road  with extra altitude to spare so Perry did a 360 degree turn to lose some altitude and line up with the road, heading south.

As they descended closer to the ground, the nearby field looked like it might be a favourable spot, but recent rains would mean the ground would be soft, resulting in a high-speed flip-over when the nosewheel would dig in.  Also, there appeared to be an east-west line of rocks in the middle of the field that couldn't be avoided.

Recalling the emergency training admonition that the pilot must not change once you have selected your off-airport landing site, Perry continue for the road.

The obstacles were a hydro line at the east edge of the road, hydro pole guy wires that extended even closer to the road, and trees along both sides.  The trees were somewhat sparse at the northern stretch of the road, but the aircraft hadn't bled off enough altitude and speed yet to touch down there - even with landing gear and flaps down.

Ben reported that there looked to be about 6 feet of space between the left wingtip and the hydro poles but Perry said he'd rather hit trees on the right than electric wires on the left.

With a loud bang and a lurch the right wing sliced the top of a cedar tree, then a louder noise and bigger lurch when it cut the tops of a stand of several trees. 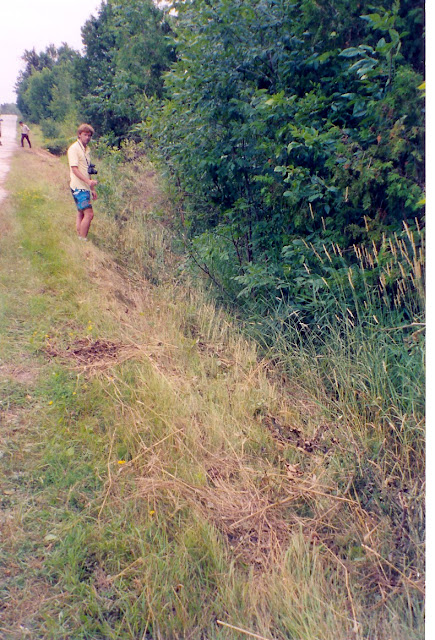 Ahead the space between obstacles narrowed to less than the 43 foot wingspan, and the trees were no longer sparse in number, nor small in size.

Next a terrific blow resulted in two 6-inch diameter cedars being cut, about 5 feet up from the ground,

and the right wing being severed from the plane's fuselage. 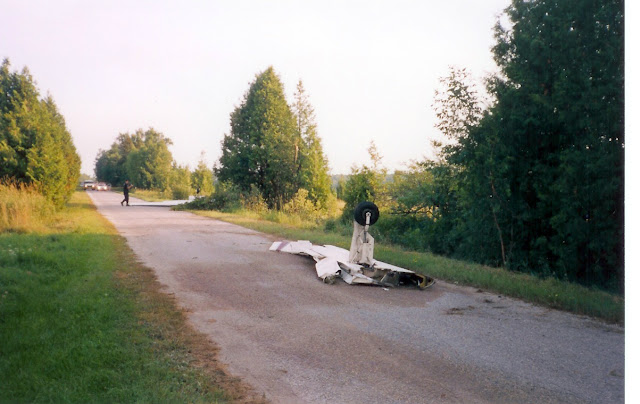 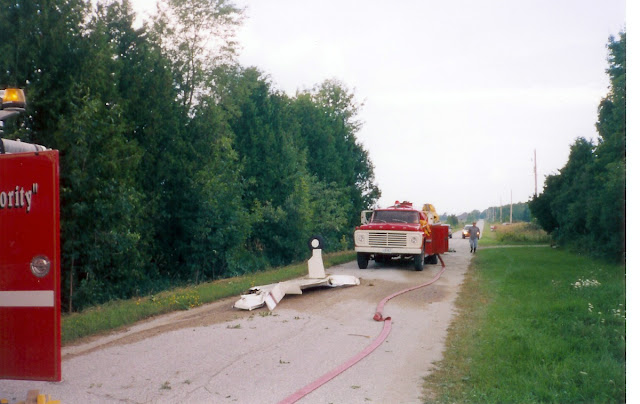 The aircraft fell to the ground and continued rolling on the nosewheel and left main wheel, while the right side of the fuselage scraped along the right edge of the road.

That soon dragged the plane into the right ditch where the nosewheel collapsed and the nose dug into the ground, vaulting the airplane tail over nose. 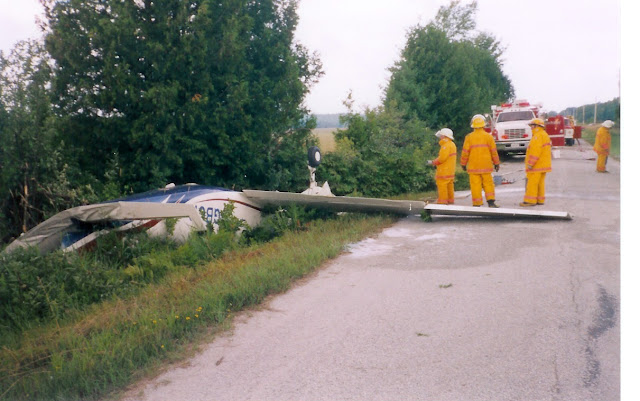 With the windows down in the dirt and grass, the inside of the airplane was dark.

Everyone was hanging upside down.  Perry yelled to his family to get out fast, as there was a risk of fire. 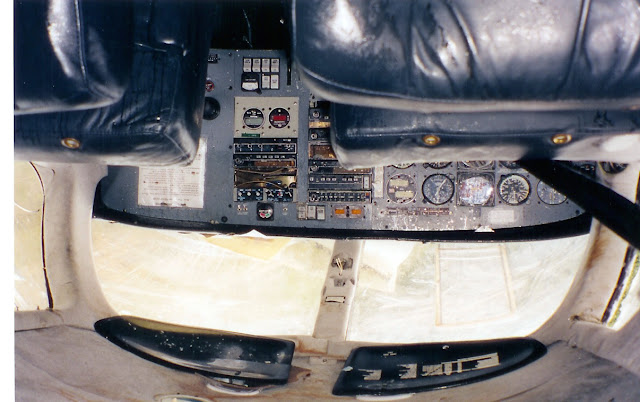 They all popped their belts and fell to the ceiling, then crawled through the broken glass (syrup bottles), blood and syrup to the door. 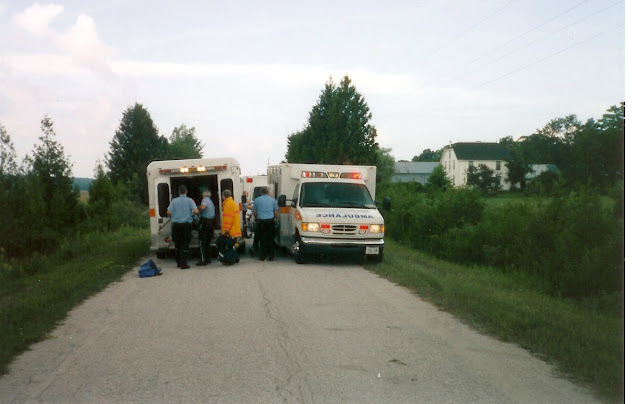 The width of the road, narrower than our wingspan

Donnabelle Smith and her daughter heard the crash very near their house, and called 911 immediately.  Within minutes the Silverwater volunteer fire-fighters foamed the airplane, cut electric wires to stop the risk of a fire, turned off the plane's Emergency Locator Transmitter and helped with the injured pilots and passengers.
The cause of the accident was 2 fist-sized holes in the crankcase of the engine, presumably due to one or two thrown rods.  The rods also smashed both magnetos from their mountings, eliminating all spark to the plugs.  The engine had only about 400 hours of use since overhaul and had been inspected within a short time before the failure.
~~~

I wonder if some people struggle

to believe in God

the way I struggle

Over the years it has gotten easier

to hop into planes.


There are some reasons for this.

is that my Dad

is the darn best pilot ever.


He became a pilot

and bought his first plane

He has since flown

(the equivalent of 77 times around the world)


He flies by the book.

Has studied and trained and simulated


So I don't much trust airplanes,


that's one place that Courage

has spread its roots in me.

On our most recent trip to Ontario

I was probably one of the less nervous passengers on board... 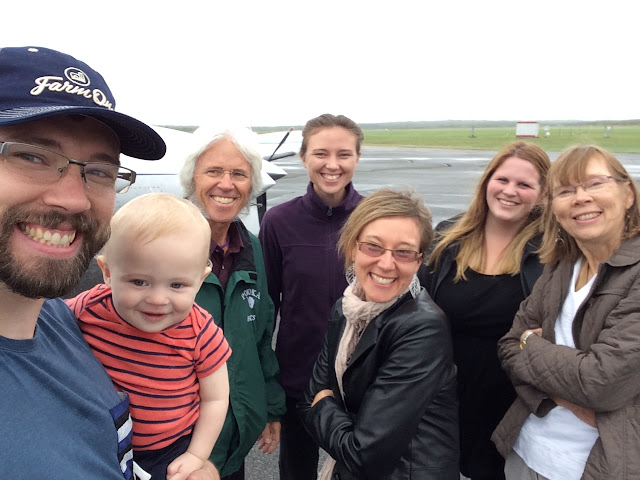 (though my nephew Greyson was for sure the least!  That kid knows no fear!)


The chance of another catastrophic engine failure felt slim to none.

And heck, we had two this time!

You could say we had engines to burn... 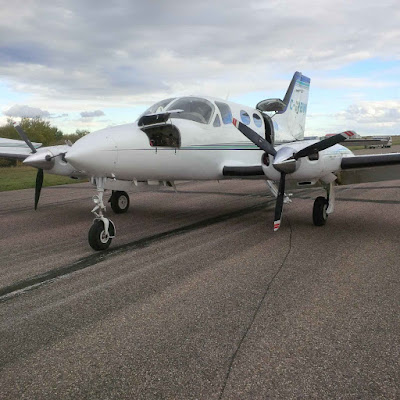 Which is why when the right engine

actually did start to burn

I was still pretty calm.


I had the power to keep calm and fly on

because we still had a lot going strong:

-an actual runway to land on

-My Father at the controls

-My Heavenly Father also at the controls


Now here is where I saw

a most fascinating bit

my sister and my sister-in-law --

they were the ones most stricken

The rest of us knew how to fall.


We survivors were going on experience;

the newbies were going on imagination.


What is the difference?


We were actually less afraid of what might happen

We had knowledge and experience.

faith in my Dad,

some lived experience to draw from,


That's the last piece I want to talk about today.


Because there was one pivotal thing

just a few years back

that made all the difference.

I was still struggling to get my Calm on.

I wanted to be able to rest assured

when my children and I flew in Dad's little Baron.


So I dug out my left brain,

and flew to Fresno for a special

There I began to learn

the ins and outs of airplanes:

how they actually fly

(still incredulous, but if you say so!),

what can go wrong,

what to do when it goes wrong,

(that would be the button
that puts you through to
the control tower,

because they
can talk you down.


Not that I remember
which button is is, but...)

Whatever you're afraid of,

and how to be prudently fearless.

on living an invincible life.


All of that and

how it relates to PARENTING!!